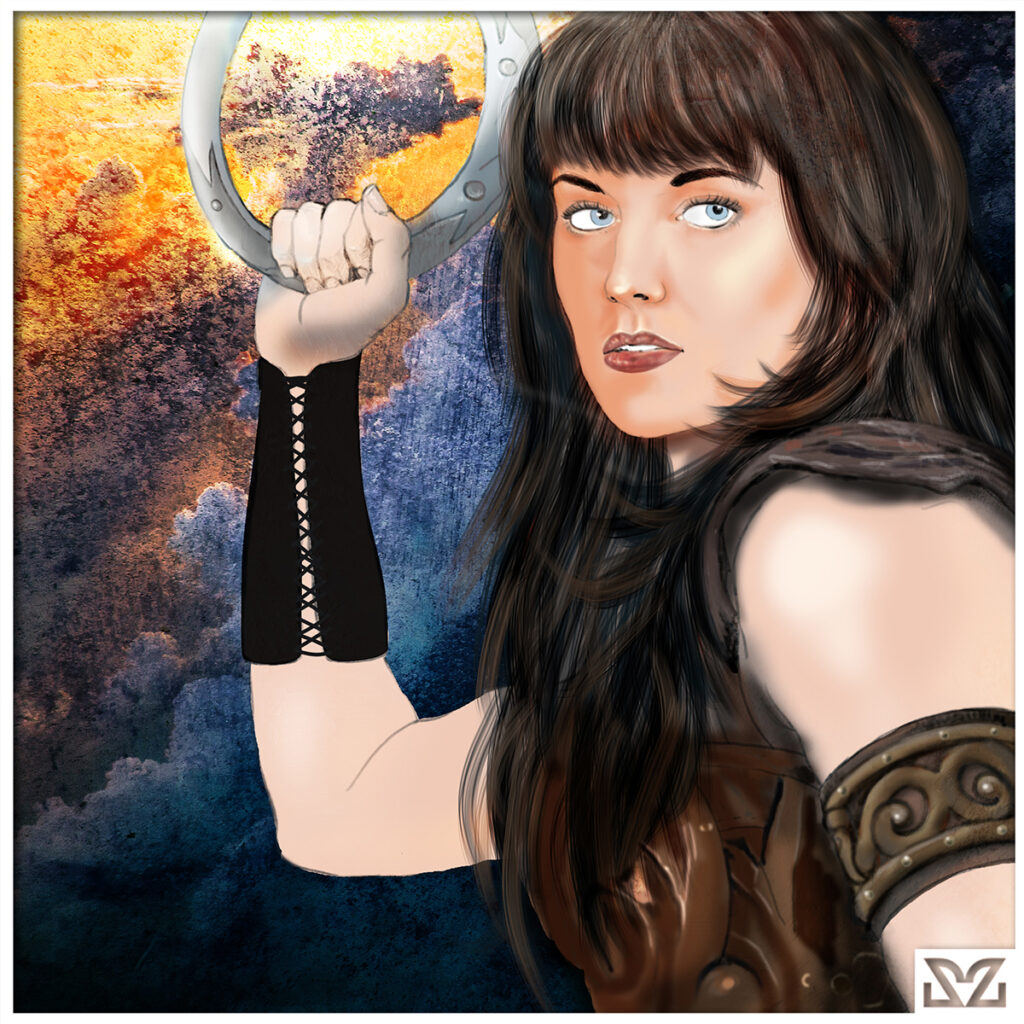 Today we are talking about the Xena – Warrior Princess TV series, first released on September 4, 1995 in the United States.

We tell you about it because, even if, on the surface, it is a nice, entertaining program, full of historical anachronisms, it remains a cornerstone of television, taken up by many subsequent directors, important in the creation of the archetype of the strong woman. we still need today, almost thirty years after the release of this series.

It was also the writer’s duty to talk about Xena, who has a She-ra keychain in her purse. If there hadn’t been She-ra in the 1980s, would there have been Xena a decade later?

At the beginning of the series, Xena is presented to us as a warrior princess, in the service of the god Mars. At the beginning of her story, while everything was going well for her and her family, an army attacks Amphipolis, her village. To defend it from the enemy, Xena and her brother fight and manage to repel the attackers. However, it is a bittersweet victory.

Many of the villagers lost their lives, as did Lyceos, Xena’s brother. The young princess was accused and banished from the village. Her mother had turned against her too. Xena then leaves her village, her heart filled with bitterness. After this painful episode, her life holds many unfortunate experiences.

In the midst of her disorder and many misfortunes, Xena decides to put her military skills at the service of evil, as we told you a few lines ago. This is how she takes part in many battles without any real foundation. She only had one thing in mind: destroy as much as possible. However, she has always been careful to spare women and children.

In full execution of her fateful project, she decides to kill the warrior Hercules, but he manages to bring her back to the right path.

Xena then decides to atone for her sins, doing good on her way and in all places where the need is felt. But she often finds herself having to deal with her dark past and the many actions, not too positive, that she had committed. Because of her dark past, the people she wanted to help her often showed fear of her towards her, or reminded her of what she was of her.

Luckily Gabrielle, a kind of guardian angel, arrives on her way. Gabrielle is a frivolous, clumsy, funny and very brave girl.

In fact, the inexperienced Gabrielle decides to follow Xena in the search for her redemption. Xena doesn’t approve of the idea due to the obvious dangers of the search, but in the end she agrees and a deep friendship is born. Over time, the young Gabrielle becomes a real warrior, endowed with many abilities.

It is precisely with the passage of time that Gabrielle turns out not to be just a friend of Xena, but also the light that illuminates the path and the conscience of the warrior princess. Indeed, Xena’s dark side tended to want to come out again, but thanks to Gabrielle’s support, the warrior manages to overcome the evil that slept inside her.

After traveling to Japan with Gabrielle to fight Yodoshi, the lord of the dark lands, Xena’s story ends. The warrior realizes that she could only defeat him by her dead. In that regard, she had taught Gabrielle a fighting technique that would have resulted in her death.

A solution could have brought her back to life, but Xena resisted, predicting that her death would allow the souls of the people she had tortured to find her salvation.

As mentioned at the beginning, the first episode of Xena, Warrior Princess, aired on September 4, 1995, until June 18, 2001. It was shot in New Zealand, which was supposed to follow ancient Greece. On closer inspection we also find 2 very young New Zealanders, who would know how to become anti-heroes when they grow up: Tony Starr aka Homelander and Karl Urban aka Butcher from The Boys.

Writer-director-producer Robert Tapert created the series for his production company, Renaissance Pictures, with executive producers RJ Stewart and none other than Sam Raimi, the director of The Evil Dead and the first 3 films of the Spiderman series.

The actress chosen to embody Xena is Lucy Lawless, who perfectly played the role of a wonder woman, so much that was appreciated by another strong young woman, Lisa Simpson.

Besides this fun fact, here’s another: the name Xena is a Greek adjective meaning “foreign”. Initially, in Rob Tapert’s intentions, the character was to be called Zena, but the Italian director Dino De Laurentiis suggested a different variant of the name, the one we all know today.

In addition to the recognizable name, Xena has the pride of having acquired a strong following, attention in fandom, parody and academia and has influenced the direction of other television series, which we now see in a little more detail.

Cultural influences of the Warrior Princess

The story of the warrior princess is made up of dramatic tales, but also of important life lessons, such as love, friendship and forgiveness. But these are not the only lessons and influences  Xena has given us.

The series has done a lot for women. It became very popular in the lesbian community due to the ambiguous relationship between Xena and Gabrielle maintained by the writers (and actresses) from the second season. With allusions and dialogues that leave room for interpretation, this series is still a reference for this community today.

In addition, Xena has been picked up by many directors and creators. For example we mention the creator of Buffy The Vampire Slayer, Joss Whedon, who attributed Xena’s existence as one of the reasons for the show’s successes with heroines just like Buffy. We also mention, in the elite of directors, Quentin Tarantino, who is an enthusiastic fan of Xena, discussed in the DVD Double Dare, a 2005 documentary about Hollywood stuntwomen in Xena and Kill Bill as Zoë Bell.

Xena has become an archetype of a strong woman. For example, Geneva, played by Keira Knightley who appeared as a warrior in the 2004 film King Arthur, has been compared to Xena by many critics. The following year, a Chicago Daily Herald review of a production of Shakespeare’s Henry IV, in which many of the male roles were played by women, was entitled “Shakespeare meets Xena”.

Thanks to the habit acquired of seeing warrior women like Xena, the author of the review pointed out that today’s public is finally able to accept women as the protagonists of fight scenes. There has been a long way to go since 2005, but this would not have been traced without the Warrior Princess.

So, Xena, woman to woman, thank you!