Hi, I’m John Keats. You may remember me from famous works like Ode to a Grecian Urn or the film about my life Bright Star. Or because today, February 23, is the 200th anniversary of my premature death.

And I say premature because I passed away at just 25 years old. Too bad, two more and, given the initial of my name, I could have entered the J27 club, along with legends like  Jimi Hendrix e Janis Joplin.

But I was also a legend, because my poems have made me unanimously one of the most significant literati of Romanticism. I have dedicated my short life to perfecting a type of poetry characterized by vivid images and great sensual charm, expressed through classic legends. Let me tell you how I did it.

The first years of John Keats

My father, Thomas, ran the stables his father-in-law built while my mother looked after me and my four brothers. Edward, the penultimate born, died almost immediately. A sign, because unfortunately, you will see, my life has been marked by many unpleasant events, which have poured into my poetic phrases.

A few years later, in 1803, I began attending Reverend John Clarke’s school. In that school I met the Reverend’s son, Charles Cowden Clarke, who would become my great friend and whom I can consider as my first “teacher” in the discovery of literature.

I remember having studied, in addition to the Latin classics, also French, history and geography. I also remember not being very good at books, but having a great passion for boxing and wrestling in general.

This lightheartedness and vivacity of mine suffered a severe blow just the year after I entered school, in 1804. My father in fact fell from his horse and died in April. A few months later my mother remarried William Rawlings, a marriage that I would dare to call unhappy as well as short.

But I hardly ever talked about it with my brothers, to whom I wrote very often when I was sent to live by my grandparents. The following year my grandfather died and we moved with our grandmother to Edmonton, a neighborhood in north London.

According to the stories of my friend C.C. Clarke, I became interested in literature around 1809, at the age of 16. True, I was very determined at the time since I wanted to win all the school awards in that field. I read all the books in the school library and translated the classics of Virgil and Fénelon. I won the first prize in the summer.

The following year, in 1810, my mother died of tuberculosis. So my grandmother was forced to set up a fund for my education and that of my brothers and she entrusted us with tutors.

Shortly thereafter, I left school and instead went to study as a medical apprentice with Thomas Hammond, a surgeon and pharmacist from Edmonton. Two of my brothers instead started working at our tutor’s accounting office.

It was in this period that I started writing my first poems, like Imitation of Spenser, To Lord Byron, etc. A short time later my grandmother also died and my little sister Fanny came to live with us and our guardians.

I entered Guy’s Hospital as a medical student but did not neglect my true passion, and so I wrote sonnets. The first publication of one of my poems took place on May 5, 1816, when the Examiner published O solitude. In the same year I passed a medical exam and started practicing as a pharmacist, surgeon and doctor.

In the fall, I became friends with scholars Leigh Hunt, Benjamin Haydon, and John Hamilton Reynolds. The first of these called me a “promise” in an article on the Young Poets of the Examiner.

The importance of inspiration

In 1817, during a dinner, Hunt showed my poems to Shelley, William Godwin, Basil Montague and Hazlitt, and they were very impressed.

A few days later, I think it was early March, I went to see the Parthenon marbles on display in London and they impressed me so much that they became the protagonists of my poems.

On March 3 I saw the printing of my first poetry collection, Poems, edited by C. and J. Ollier. Great satisfaction. I also agreed with my future publishers, Taylor and Hessey, for the publication of future poems.

In April I went to pay a visit to the Isle of Wight, and it was there that I prepared the plan for my play Endymion and, at the same time, began to study Shakespeare. I really enjoyed visiting places that could inspire me; for example, I went to Canterbury and Hastings.

Here took place the mysterious and brief meeting with the talented Isabella Jones, who became a great friend and confidant of her. Then I also visited Oxford and devoted myself to reading Milton and Wordsworth.

By November the Endymion was finished and saw the prints the following year, after I reviewed the proofs several times. At that time I was caring for my brother Tom who was very ill. My other brother, George, married and emigrated to the United States with his wife. So I decided to do the walking tour of the Lake District and Scotland with my friend C. Brown. In addition to my friend, for the whole tour, I also brought a translation of Dante’s Divine Comedy.

John Keats against all

The journey was interrupted because I fell ill. So I went back to assisting my brother who, in the meantime, had deteriorated. To the blow received at the sight of my brother was also added the critical failure of Endymion: three critics massacred me and advised me to continue to be a doctor instead of writing poetry.

There were controversies, articles, trials and even duels. Many people believed me unable to withstand criticism and that my premature death was due precisely to the inability to manage all this fuss around my works. Instead I was much stronger than people believed, do you remember for example the letter of October 8, 1818?

“I can only feel indebted to those who have taken my defense. For the rest I begin to understand both my strength and my weakness well. Praise or blame has but a momentary effect on the ones whose love for beauty in the abstract makes them a severe critic of their own work “

1819 was a very important year for me, because I concentrated a lot of work in a short time. In fact, I wrote my famous odes: On Indolence, On a Grecian Urn, and To a Nightingale, to name a few. And two versions of Hyperion. This last poem was difficult to compose, as I felt the tension of the disease.

And I also felt the growing love for Fanny Brawne, my fiancée (also a neighbor to be honest), whom I kept hidden. I filled her with love letters that caused a scandal when they were discovered years later.

In fact, in my poems, I painted with words an atmosphere of passion and excitement in the description of the escape of a couple of young lovers. I can say it myself, in these last poems I could see my intellectual progress, but also stylistic, if compared to my first writings.

But I also had another obsession in mind, the lack of money. I thought about going to work, but I never did anything with it and I dedicated myself exclusively to poetry. And also to Fanny, with whom I got engaged at the end of this incredible year for me.

Speaking of money … early in the new year, 1820, my brother and his wife returned from the United States. Full of debt. I tried to help them but Otho The Great, the only play I had written, was rejected. But my Ode on a Grecian Urn was published.

On February 3, I felt very sick from a hemorrhage. I stayed at home all month and, overcome by depression, I suggested that Fanny break the engagement. On June 22, I had another bleeding and went to live in the house of my friend and scholar Leigh Hunt, who took care of me.

In the meantime some of my poems were published, which gave my soul some relief. That summer the doctor ordered me to move to Italy, where the climate would help me. So in September I left and took a ship with my friend, the painter Joseph Severn.

A few days after leaving, we stopped in Portsmouth where I composed the sonnet Bright Star. On 21 October I arrived in Naples and then I moved to Rome, taking a house in Piazza di Spagna. On November 30th I practically wrote my last letter, I knew that those were my last weeks of life.

What remains of John Keats

Now the Zoa Studio team speaks again. An autopsy was performed on John Keats which revealed a very severe tuberculosis. Like the one who took part of his family away. Keats was buried on February 26 in the Protestant Cemetery in Rome. 50 years later, even Joseph Severn who had accompanied him on his last journey would rest next to his friend. On the tomb, according to the will of the poet, daisies and this inscription were placed.

«This grave contains all that was mortal, of a YOUNG ENGLISH POET, who on his death bed, in the bitterness of his heart, at the malicious power of his enemies, desired these words to be engraven on his tombstone: “Here lies one whose name was writ in water” 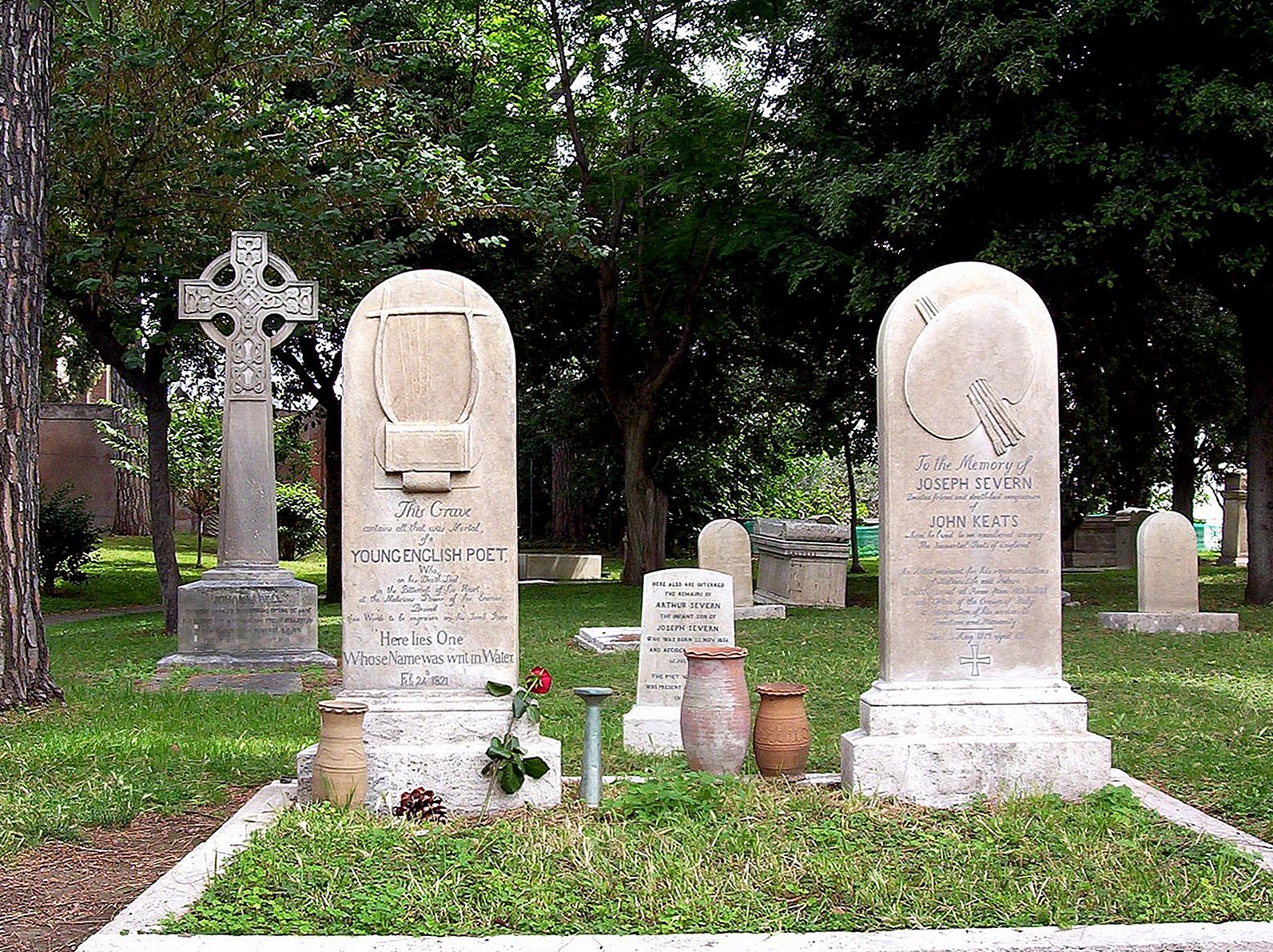 It is impossible to say how much posterity could have received literally if Keats had lived longer.

However, his reputation grew steadily throughout the 19th century. His influence is found everywhere in the verses of the Victorian age, from Lord Tennyson’s early works onwards. The emotional character of Keats’s poetry and the delicacy of his natural observation were much admired by the Pre-Raphaelite painters, who illustrated it in their paintings.

In fact, Keats’s 19th-century followers on the whole appreciated the more superficial aspects of his work, and it was largely left to the 20th century to realize the importance of his technical and intellectual achievements.

And, just as we started with a Troy McClure quote from The Simpsons, let’s not forget that the latter, in the 21st century, quoted “Beauty is truth, truth beauty” (from Ode on to Grecian Urn) in one episode.

And the few beautiful words of an English poet in an American cartoon simply proved that John Keats succeeded in his intent. That of living forever through his verses.