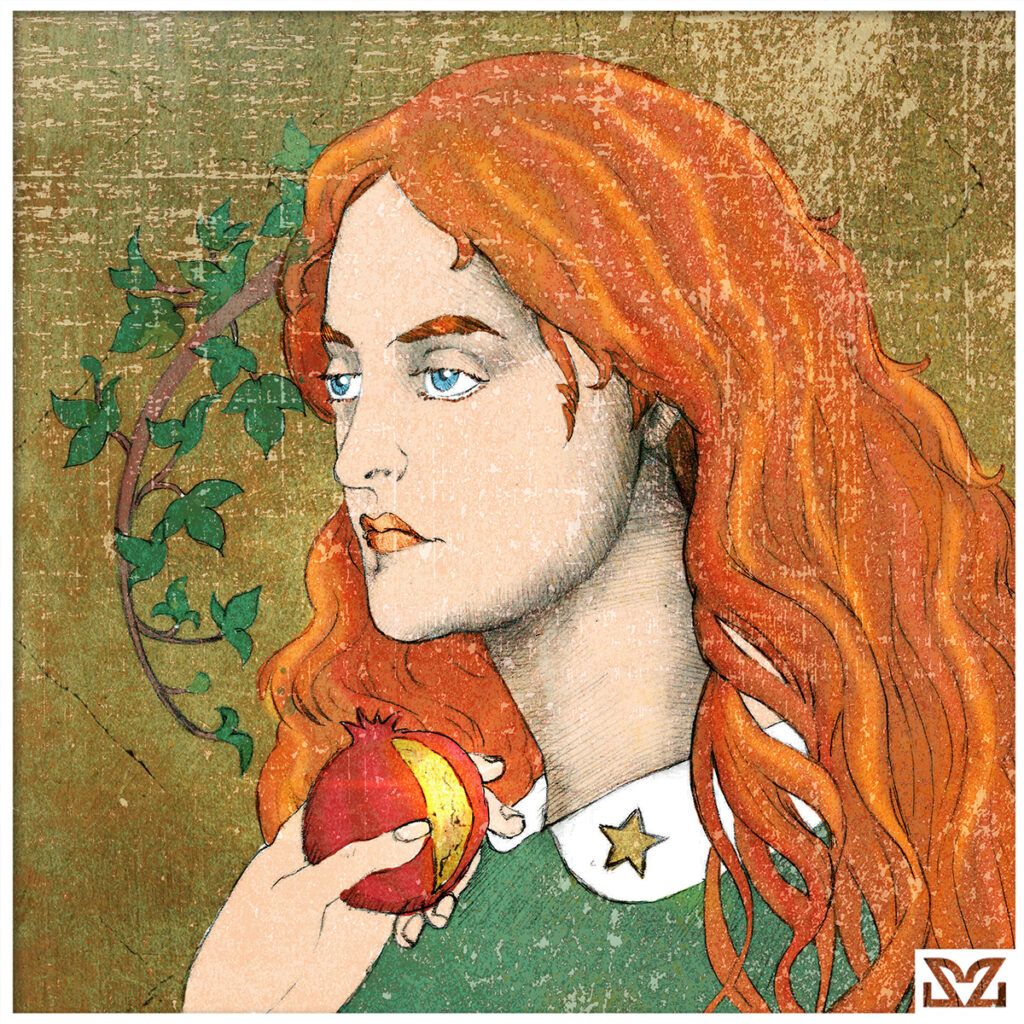 The exam on Christina Rossetti was by far my favorite at university, several years ago now!

It is therefore a pleasure to tell you the story of this British poetess, sister of the Pre-Raphaelite painter / poet Dante Gabriel Rossetti, of William Michael and Maria Francesca. Her father, Gabriele Rossetti, was an Italian poet. Her mother, Frances Polidori, was the sister of Lord Byron‘s doctor, John William Polidori.  The latter is famous for writing The Vampire, the first short story in modern literature on this legendary creature.

Christina was then born into a family in which painting and literature dominated, and chose the second path. Now we tell you how her talent developed on the anniversary of her death.

Christina Georgina Rossetti was born on December 5, 1830 in London.

As introduced a few lines ago, Christina was the youngest daughter of Gabriele Rossetti and was the sister of the painter-poet Dante Gabriel Rossetti.

In 1847 the grandfather Gaetano Polidori printed a volume of Christina’s Verses, in which the signs of poetic talent were already visible. In 1850, under the pseudonym Ellen Alleyne, she contributed with seven poems to the Pre-Raphaelite magazine The Germ.

Three years later, when the Rossetti family ran into financial difficulties, Christina helped her mother work at a school in Frome, Somerset, but with little success. In 1854 the two had to return to London where, shortly afterwards, Gabriele Rossetti, Christina’s father, died.

In financial straits, Christina began her works in the company of her mother, demonstrating devotion to her parent, religion and writing, especially that of poetry. Christina was a fervent member of the Anglican Church and, for this reason, in 1850 she broke her engagement with the artist James Collinson, an original member of the Pre-Raphaelite Brotherhood, because he had become a Catholic.

For similar reasons she rejected Charles Bagot Cayley in 1864, although a warm friendship remained between them. In this, Rossetti is very reminiscent of another writer, Jane Austen, of whom we told you a couple of weeks ago.

In 1862 Christina Rossetti published Goblin Market and Other Poems and in 1866 The Prince’s Progress and Other Poems, both with frontispiece and decorations by her brother Dante Gabriel.

These two collections, which contain most of her best works, established her among the poets of her time. The stories in her first prose work, Commonplace and Other Short Stories (1870), are not of great merit, but Sing-Song: a Nursery Rhyme Book, with illustrations by Arthur Hughes, holds an important place among the children’s books of Nineteenth century.

In 1871 Christina was struck by Graves’ disease, a thyroid disorder that spoiled her appearance and left her life in danger. She accepted her affliction with courage and resignation, backed by religious faith, and continued to write, publishing a collection of poems in 1875 and A Pageant and Other Poems in 1881.

But after the onset of her illness she concentrated mainly on devotional prose writings. Time Flies (1885), a diary in verse and prose, is the most personal of these works. Christina was considered a possible successor to Lord Alfred Tennyson as a poet laureate, but developed fatal cancer in 1891.

The Goblin Market and Other Poems

In 1862 Christina Rossetti published her collection of poems “Goblin Market and Other Poems“, the most famous to date, which was a huge critical success. It contains some widely celebrated poems, such as Goblin Market, Maude Clare, The Convent Threshold and Up-Hill.

A beautiful edition was illustrated by Arthur Rackham, one of the illustrators of the Victorian golden age (do you remember Kay Nielsen and Harry Clarke?)

Christina Rossetti was only 31 at the time of the collection’s publication and was widely hailed by critics as the foremost poet of her generation. Famous fellow poet Elizabeth Barrett Browning died in 1861 and Christina was identified as her natural successor.

Rossetti’s “The Goblin Market” tells the story of two sisters, Laura and Lizzie, who interact with a group of goblins.

At the beginning of the story, the sisters hear the call of the goblins in the woods “come buy, come buy” and then hear the cautionary tale of Jennie, who tasted the wares from the goblin market and wasted the rest of her life pining for the fruit.

However, Laura gives in to temptation, offering a lock of her hair in exchange for a taste of the goblins’ fruit. Later, Laura discovers that she cannot hear the goblins nor can she find them. She begins to wither, just like Jennie had.

She cried, “Laura,” up the garden,
“Did you miss me?
Come and kiss me.
Never mind my bruises,
Hug me, kiss me, suck my juices
Squeez’d from goblin fruits for you,
Goblin pulp and goblin dew.
Eat me, drink me, love me;
Laura, make much of me;
For your sake I have braved the glen
And had to do with goblin merchant men

The ending of the poem follows Laura and Lizzie into adulthood when they tell their children the story of the goblin market and Lizzie’s sacrifice to save her sister.

The fruit in the poem that the goblins sell has been interpreted in various ways: critics have long seen the eroticized description of the exotic fruit as a symbol of (sexual) temptation.

Laura represents the “fallen” woman who succumbs to male wiles and is ruined by it. We must not forget that Christina Rossetti was a volunteer from 1859 to 1870 at the St Mary Magdalene charity house in Highgate, a refuge for ex-prostitutes, and it is suggested that The Goblin Market may have been inspired by the “fallen women” she met.

Some critics have seen something else in this temptation and drawn parallels between Laura’s addiction to the exotic fruit in poetry and the experience of drug addiction. In fact, in Victorian Britain, opium addiction was a real social problem, being opium, like the fruits of the Goblin Market, both sweet and bitter (i.e. with a positive and a negative side), and also exotic (seen that opium came from the East).

Still others have noted that Laura and Lizzie live alone, with no parents or guardians, a rather unconventional situation for two young Victorian sisters. Partly for this reason, and partly because the poem’s fruit is described as “forbidden”, critics have interpreted “Goblin Market” as an example of female homosexuality. Although the narrator of the poem relates that Lizzie thought their dead friend Jeanie “should have been a bride”, Laura and Lizzie are unmarried until the end of the poem, which is set years later, when they are considerably older. And Christina Rossetti also remained single. Whatever the interpretation of Goblin Market, it remains a modern, layered, funny and intelligent poem, certainly avant-garde.

Death and legacy of Christina Rossetti

When I am dead, my dearest,
Sing no sad songs for me;
Plant thou no roses at my head,
Nor shady cypress tree:
Be the green grass above me
With showers and dewdrops wet;
And if thou wilt, remember,
And if thou wilt, forget…
Christina Rossetti, 1862

Beneath Christina Rossetti’s humility, devotion and quiet and holy life was a passionate and sensual temperament, critical perception and a lively sense of humor: she and Jane Austen really look alike.

Part of her success as a poet comes from being able to unite precisely these seemingly contradictory aspects of his nature.

A rediscovery of Rossetti began in the 1980s when feminist critics undertook a re-examination of her poetry (most notably Goblin Market), exploring her portrayal of sister bonds, female creativity, and sexuality.

Trends today tend to recontextualize Christina Rossetti in Victorian culture and towards critical interest in a wider range of her works, including her fiction, non-fiction and children’s poetry. Other critics, however, would like to see Rossetti’s influence only as a female writer and not a mainstream one.

What remains of her poetry today is that it is recognized as one of the most beautiful and innovative of the period … by both sexes.